Declaration of The Founder of The Salvation Army:

History of The Salvation Army The Salvation Army was founded in 1865 in London, England by William Booth and Catherine Booth. In response to a strong calling from God, the Booths reached out to the poor, the homeless, the hungry and the destitute, and proclaimed the gospel of the Christ.

William Booth’s original aim was to send the new converts to established churches, but he soon realised that the regular churchgoers did not feel comfortable to worship with the new converts. He thus founded East London Christian Mission for these people in the slums of East London. The converts spread out of the East End of London into neighbouring areas and then to other cities.

Booth was reading the 1878 Christian Mission Magazine when he noticed the statement ‘The Christian Mission is a volunteer army.’ Crossing out the words ‘volunteer army’, he penned in ‘Salvation Army’. The name ‘The Salvation Army’ was then adopted. From that point, William Booth was known as ‘General’ by his followers, converts became soldiers of Christ and were also known then as Salvationists. The ‘Army’ was furnished with uniforms, a flag, a brass band and martial music.

The Booths and other officers of the Army endeavoured to expand the kingdom of God through the two-pillar directions of evangelical ministry and social service ministry. Today, the work of The Salvation Army has expanded to 132 countries and areas, meeting human needs in the name of God without discrimination. The Salvation Army in Hong Kong

In 1930, by invitation of the Hong Kong Government, The Salvation Army started its ministry in Hong Kong by providing residential care to underprivileged young girls and women. The Salvation Army provides social services and fulfills the mission of proclaiming the Gospel. In the early days, church gatherings were held in open areas. The first corps (church) of The Salvation Army was established in 1937 in Kowloon City.

Affected by the war in the early 1940s, thousands of refugees emerged in the city. The Salvation Army set up a food kitchen to feed the hungry refugees daily. The social environment in Hong Kong became stable in the 1950s. The Salvation Army established schools and provided social services to cope with the increasing welfare demands of the community.

In the following decades, The Salvation Army continued to expand its community services, with schools opened and Corps (Churches) set up. Recycling Programme and Family Stores also operated to promote green living and recycling for charity. Emergency relief programmes were carried out in different countries in need.

In 2020, The Salvation Army celebrated its 90 years of services in Hong Kong. Over nearly a century, The Salvation Army Hong Kong and Macau Command has grown from a small group ministering to vulnerable women and girls, to a multi-dimensional service organisation giving hope and support to all those in need. 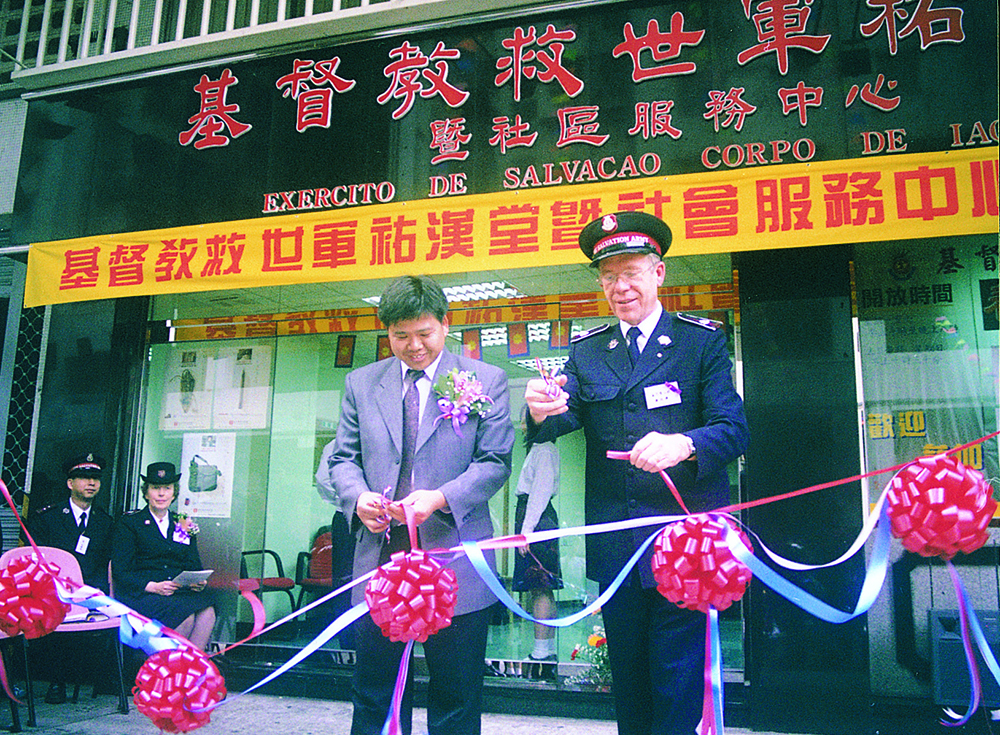 The Salvation Army in Macau

The Salvation Army commenced its services in Macau in 1999 with the setting up of Iao Hon Corps and Community Service Centre. The Corps was officially opened in 2000, and the first Family Store started operations in Macau in the same year. The second store was opened in 2018. Apart from resale of used materials, selected items are delivered to the needy. The Salvation Army Joy Family Integrated Service Centre, the first social services unit of the Salvation Army in Macau, was established in 2014 with the aim of providing services to the local young people and families. In 2017, The Salvation Army (Macau) Education Centre, the Army’s first educational services unit in Macau, was commenced, serving children with special educational needs and their families. The Salvation Army in Mainland China

As early as 1916, The Salvation Army commenced its services in Beijing, providing assistance to people suffering in wars. During the following decades, hospitals and orphanages were set up in Beijing, Shijiazhuang, Tianjin and other areas, taking care of the countless poor and orphans. In 1988, when a strong earthquake occurred in Gengma County of Yunnan, The Salvation Army started to engage in emergency relief, post-disaster reconstruction and social assistance work. On 1 January 2017, after the official implementation of the Law of the People’s Republic of China on Administration of Activities of Overseas Nongovernmental Organizations in the Mainland of China, The Salvation Army (Hong Kong) Yunnan Office and The Salvation Army (Hong Kong) Sichuan Office were registered in compliance with the law.